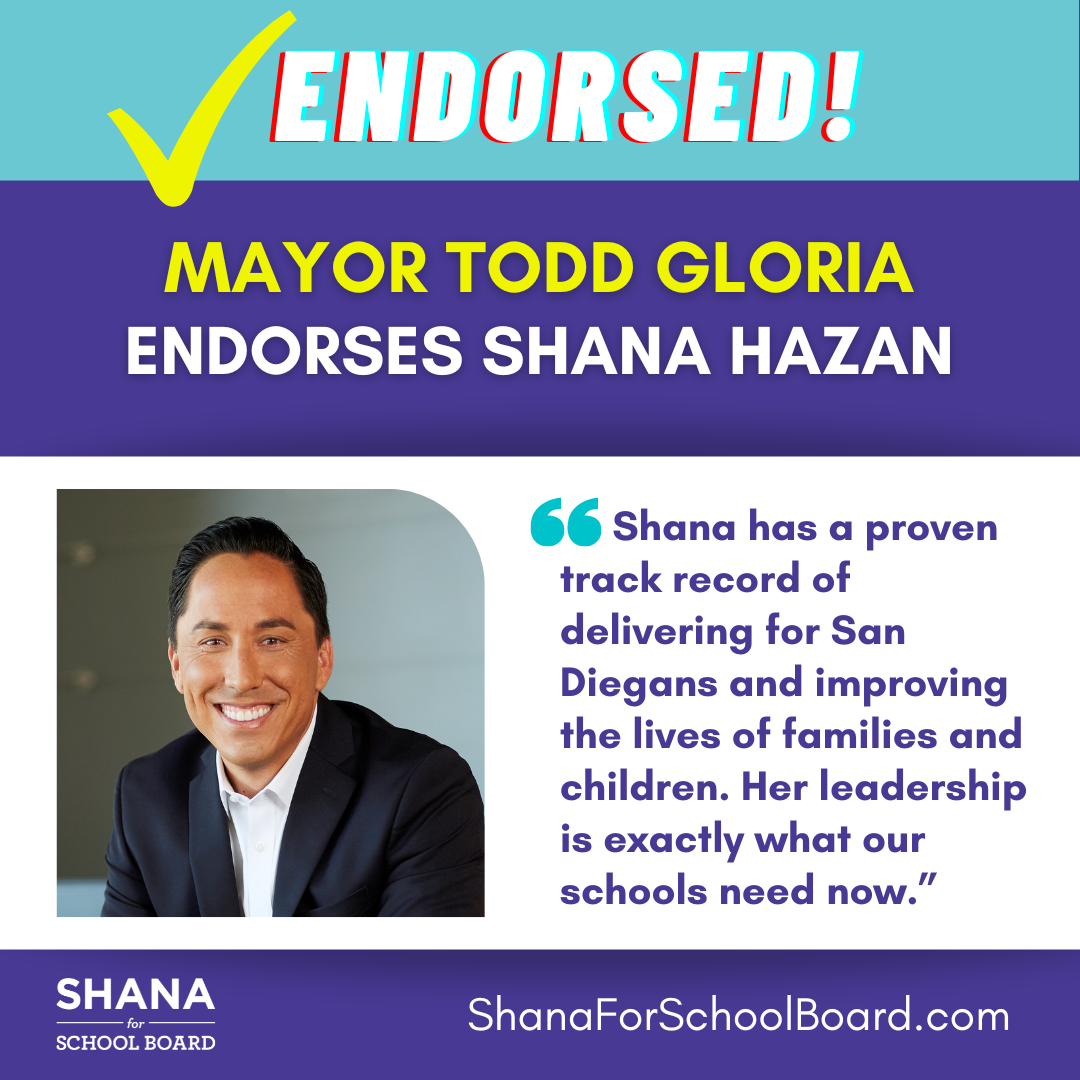 San Diego Mayor Todd Gloria throws support behind June primary first-place finisher Hazan, who is one step closer to consolidating city leadership and Democratic support in her school board bid

Gloria’s endorsement comes on the heels of Hazan having secured the support of the San Diego County Democratic Party (SDCDP) with a massive 77% of the party’s Metro West Area Caucus vote.

Hazan now claims the support of the mayor and more than half of the San Diego City Council. Councilmembers von Wilpert and LaCava were the latest to publicly back Hazan, joining City Council President Sean Elo-Rivera and Councilmembers Raul Campillo and Dr. Jen Campbell.

“Shana has a proven track record of delivering for San Diegans and improving the lives of families and children. Her leadership is exactly what our schools need now,” said Gloria. “I have witnessed her leadership at Jewish Family Service, the city’s Human Relations Commission, and the state’s First 5 Commission. I have every confidence that on the School Board, Shana will continue to be a powerful advocate for our students, a voice for our parents, and will work tirelessly to deliver stronger schools that give every student across San Diego the opportunity to excel. I’m proud to endorse her.”

​“I’m honored to have earned the support of Mayor Gloria and I look forward to working with him and the City Council to deliver stronger schools across San Diego,” said Hazan. “As a mom with a student in our schools, this race is personal to me. You have my word that I will work every day to build healthier communities and schools where every child in every neighborhood can reach their full potential.”

Hazan, who serves as Vice Chair of the California Children & Families Commission (First 5 California) and is the only parent with a child in SDUSD schools in the District B race, placed first in the top-two primary election in June, defeating two opponents. Winning with more than 52% of the total vote, Hazan earned more votes in the primary than the combined total of her opponents. Hazan outraised her opponent by more than $80,000. She will face Godwin Higa in the general election.